(This is just an introduction – if you want to jump right into the story, it starts in Part 1!)

“The Weretortoise Thabi Bithardolil has come! A large tortoise twisted into humanoid form. It is crazed for blood and flesh. Its eyes glow chartreuse. Its black scales are jagged and overlapping. Now you will know why you fear the night.”
-An actual quote from one of my Dwarf Fortress sessions 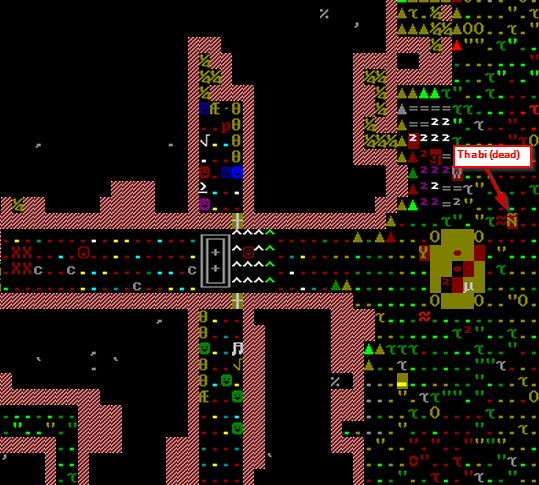 Thabi the Weretortoise sounded a lot scarier than it was. He was also slow.

“His leisure activities are more complicated than most people’s jobs.”
– My wife Bethany, when describing me.

My wife’s quote above is a completely accurate statement about me; I love complicated hobbies, and Dwarf Fortress is an immensely complicated computer game that I love to play. Lately I’ve been binging on it, and I’ve been neglecting my writing. So, I decided to have some fun and flex the old writing muscles by putting the two together. Today begins a blog series where I will play the computer game Dwarf Fortress and create an epic story from what occurs during the game. Everything you read will be actual events that occur in the game, from the perspective of the dwarves, followed by a more geeky explanation of what transpired during that game session. I know I’m not the first person to do this, but I still hope you enjoy it.

If you follow the indie computer game market, chances are you’ve heard of Dwarf Fortress; this post is just an introduction to the game itself, so if you’re already familiar with the game, you can skip ahead to Part 1. For the uninitiated, sit back and get ready to have your mind blown as I introduce the basic concepts of the game today.

Dwarf Fortress is one of the most complex video games ever created (so agrees the author of the strategy guide you can buy from O’Reilly press). It’s programmed by one man, Tarn Adams, and he has been working on it for 12 years; it has been in players’ hands for the last 8. This past July, Dwarf Fortress released version .40, which means that the developer considers this game to be about 40% complete. The game is classified as being in the alpha stage of development, which supposed to be a stage so riddled with bugs and application crashes that most people are never allowed to see it. A beta version, which is an almost-final version looking for that last coat of polish, is likely a decade or two away. The game is free to download and play, in it’s (incomplete) entirety, and yet Adams does the unthinkable: he works on this game as his full time job. How does he feed himself and otherwise make a living? Through the generous donations of his loyal, somewhat fanatical, fanbase. He is living the dream a majority of indie game developers will never experience.

If that’s not impressive, take a look at what people are shelling out their money for: 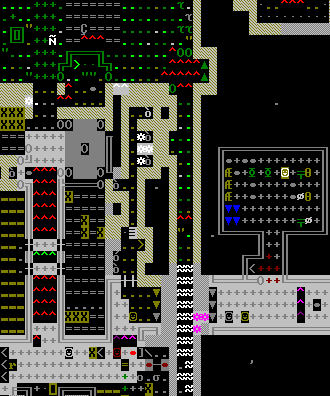 Who needs graphics when you can have THIS?

Not very pretty looking, is it? And yet he makes $50,000 a year coding this game. FOR THAT? Is he a genius or a snake oil salesman?

The former, I assure you.

“But what are we looking at?” you ask. Those are called ASCII text characters, reminiscent of 1980’s style computer games before graphics really existed and were otherwise “required” for games. That’s just a static image above, of course; in the actual game, a lot of those letters and symbols move around because they represent things: people, creatures, leaves; some stay put because they are stones, walls, doors, etc. Here’s an annotated version of that previous screenshot.

I’ll admit, this view is confusing even for me to look at. It reminds me of the Matrix (others think so too), and although I’ve tried to be a purist with the original graphics, I just can’t do it. Instead, I use fan-created graphics that replace the original, so that it is easier to play. How’s this one?

The difference is like night and … later that night.

Still confusing? Yeah, it is, but that’s a big hurdle we just got over.

So graphics aside, what is this game about, anyway? Well, it’s really whatever you want it to be, but the general gist is to take seven dwarves (ha!) that have just arrived at a site and make a home for them. The dwarves should, ideally, come prepared with some basic tools and food, and they each have their own skills, so it’s just a matter of getting them to do what they need to do to survive. The tricky part is that you don’t really control the dwarves themselves, you control the tasks you want completed. This means you designate areas to be worked, such as mining out a hole, planting crops, or chopping some trees; or you might tell the dwarves you want a carpenter’s workshop built in a certain location, and later, tell that workshop to start making some wooden barrels to store supplies in. Ultimately, they will do all this stuff when they good and well feel like it. As your dwelling grows, you’ll get some migrants who’ll want to join you, your dwarves will pair off and make dwarf babies, and some will die due to old age or, more likely, tragic reasons. There’s never a dull moment.

Part life simulation, part city simulation, part strategy, part story-telling, part … it’s hard to classify the game, really. But where the game really shines is the amount of detail that goes into just about everything (and I mean everything). Here’s but a sample:

One last thing to always keep in mind – and this bothers a lot of people – is that, in the end, you will lose. It’s pretty much inevitable. Whether you run out of food (or worse, booze – dwarves need alcohol) and starve, or get smashed by a goblin army and their troll sidekicks, or you dig into an aquifer and flood the whole fortress, or you dig too deep and too greedily and find shadow and flame, eventually, you will lose.

So what’s the point?

Because losing is fun.

And that fun makes great stories.

The story begins in Part 1.