25th day of Limestone, 550 years since the Record began,

So it is true: goblins are on the move. Our Mountainhome liason Endok Kuletkoman arrived yesterday and met with Lokum and I to discuss the disturbing news. Submergedmirror, a fortress just to our southwest, was conquered by the goblins of the Witch of Steam. The fortress Shielddike is being sieged right now, by a group of goblins calling themselves The Untoward Curses, led by Sasmar Screamworried. Eleven small groups of dwarves are known to have escaped, but their current fates and the fate of the fortress are uncertain. We all fear the worst.

Every dwarf in our outpost decided, unanimously, that to venture off and search for survivors is foolhardy. A small band of goblins might be thwarted, but a siege army? They would flatten us to the very stones we sprung from. We stay here, then, and make a stand even to our deaths. If Sasmar and the Untoward Curses come this way, we intend to fight on our terms, where we can control the battle. Ideas are being sketched out now, but time may be short. We must work quickly, for our enemy could arrive at any moment.

Endok arrived accompanied with some traveling merchants, but we have nothing to trade with them. I wish we did, for we could use some arms, food stores, anything that could aid us if we were besieged. But there’s nothing to be done about it now.

1st day of Moonstone, 550 years since the Record began,

Winter is upon us, and we have heard no more news of the siege in the south, nor have we seen any inklings of goblin activity near our site. Despite this seemingly good news, no one here is at rest. Realizing our numbers are simply too small for open combat, and since our battle experience is limited as it is, we have instead decided to fight with what we do have: the very rock we stand on. The plan is simple: lure the simple-minded goblins into a trap–or should I say, traps.

We have created an alternate entrance to our home which opens on level with the vast field. We will make it appear to be our official entryway so as to call the goblins’ attention. If a wide open doorway isn’t enough incentive, the hens have hatched over thirty chicks, so we will have plenty of bait for the bloodthirsty abominations to come after.

Once they are inside, we will seal the gate shut, and the enemy will have to navigate what the men have nicknamed “The Hall of Death.” We will have traps of all kinds waiting for the creatures, ready to crush, saw, maim, dismember and impale their twisted bodies until every last one of them lies dead. If by some miracle they are able to escape these traps alive, a narrow corridor awaits them where we can fire our arrows at them from behind safe fortifications. If any of the enemy should survive all this, then the god Rimtar is against us. May it never be!

Our grandest trap I have designed myself, and although its true target is Siga Gravefatal himself, I will use the goblins to test it. It is a tall platform of towering rubble that will fall upon any creature which triggers a pressure plate on the floor beneath it. I dare Siga or any creature to escape it alive.

One of the things I’ve always been bad at in this game is defense. The sheet amount of other things to keep track of is daunting, and I always – ALWAYS – seem to forget to make some kind of deterrent into my fortresses. The game makes it relatively easy to have basic defenses: walls, moats, traps, retractable bridges, things like that. This time I want to be ready, not just for the sake of the story, but because now I have warning that the goblins are likely coming soon.

How do I know? Prior to July’s update, ambushes and sieges happened at regular intervals, and the strength of the attacking force was proportional to your fortress’ total wealth. I thought that to keep the wealth down was to keep safe. From what I gather now, because of the “world activation” enhancement to the game, attacking forces are pre-existing bands of enemies that are traveling the map. So when I saw the news of attacks from my liason, and I used Legends Viewer to see where these locations were (close to me!), I immediately changed tactics to a defensive posture. I would love some kind of elaborate obstacle course-like system, but what I am planning will have to do. 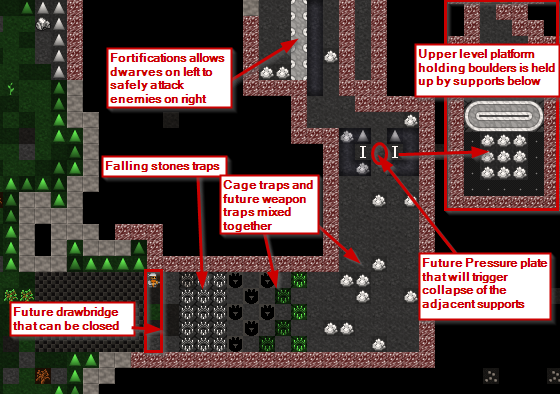 While I’m at it, I figured I would construct the weapon which should hopefully defeat the forgotten beast Siga Gravefatal, if I am successful in luring him out of hiding. (It’s the whole purpose of my story, after all.) A few years ago I had created a similar pressure-plate-triggered cave-in trap, and it killed a forgotten beast. I’d love for it to work again this time.

The story continues in part 6.

If you’re enjoying this story, perhaps you might enjoy my original fantasy novel, By the Light of the Moons, available for download on Amazon Kindle.